Off paddock solutions in the Waikato – Part 2

Home / Knowledge Centre / Off paddock solutions in the Waikato – Part 2

Off paddock solutions in the Waikato – Part 2

I recently travelled to the Waikato region to look at some off paddock solutions and to discuss these with their owners and farm consultants from Dairy Production Systems Ltd (a farm consultancy business specialising in dairy cow production). The following is a round up of my findings from the second and third farm visit. Read about the first farm visit here.

The next farm we visited milks 700 Friesians on a 170Ha milking platform and also has a 20Ha runoff. Calving is split 50:50 spring-autumn and any cows that fail to get in-calf from one mating season are then mated in the next one. They run a system 5 farm (*see notes at the end of this article for an explanation of the various farm systems) with a high level of inputs fed to the cows. The farm features two feed pads where cows and heifers go when the weather dictates. The cow feed pad is 80m x 20m and the heifer feed pad is 60m x 9m. 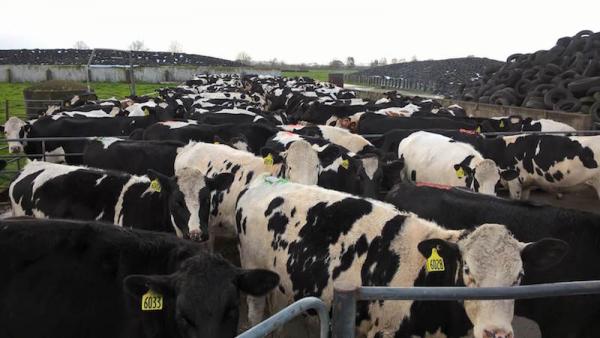 After the first season as a client of DPS Ltd their per cow milk production went from 400kgs milk solids to 530kgs milk solids with only slight changes to the cows’ diet. The herd was initially LIC based but is now bred to North American genetics.

This family farm covers 69 hectares on which they milk 330 Kiwicross cows through a herringbone shed with a seasonal supply contract. The farm was first settled by the current farmer’s father and his first production was 19,000kg milk solids. This has grown to an impressive 155,000kg milk solids last season!

The farm is run as a system 4-5 farm*; maize silage is the main imported feed with 500 tonne bought in per year along with PKE and a dairy meal ration. No supplements are made on the farm. The milking herd is fed 1.2kg of dairy meal and 1kg of PKE per day.

The farm grows plentiful quality pasture, up to 24 tonne per hectare; according to DNZ, this is one of the highest producing farms in New Zealand.

The off paddock solutions used on this farm are an old two row freestall dairy barn and a covered feed pad in which the cows can roam. It is only used in the winter months, prior to calving; once calved the cows go out onto pasture.

The freestall barn is very small and doesn’t have automated scrapers or feed lanes as all feeding is done on the feedpad. Cows can move freely from one facility to the other and seemed very happy in either. The cows looked in great health with the vet only called out to administer a Lepto vaccine.

Artificial insemination mating is often completed in 12 days or under, with a very low empty rate. The herd also has some cows that are over 20 years in age. These are all benchmarks that any dairy farmer would be proud of.

As mentioned in part 1, Dairy Production Systems’ philosophy and way of helping their clients is often through implementing very simple changes to the way the farms are managed. This trip has really opened my eyes to what can be achieved by making modest changes to a dairy operation and with a targeted investment in on-farm capital expenditure.

System 1:  Altogether grass self-contained, all stock on the dairy platform. No feed is imported, No supplement fed to herd except that harvested off the effective milking area.

System 2:  Feed imported, either supplement or grazing off, fed to dry cows Approx 14% of feed is imported.

System 3:   Feed imported to extend lactation and for dry cows. Approx 10-20% of total feed is imported.

System 4:  Feed imported and used at both ends of the lactation and for dry cows. Approx 20-30% of feed imported.

System 5:  Imported feed used all year, throughout lactation and for dry cows Approx 25-40% of total feed is imported.