Last Friday and Saturday saw Shane McDonald and myself attend this year’s Wanaka A & P Show. The weather was hot especially on Friday but slowly cooled down on Saturday with the forecast rain arriving that night. We were in a new area for exhibitors this year, opposite Power Farming Dunedin and Willowridge Developments, who won the Large Exhibitor Award. We were on a standalone site this year having decided not have a combined site with roofing.

The Show is very well supported by the public attracting over 45,000 visitors this year, up 5000 on last year.

We had some very good enquiry for buildings with twice the number than last year, which will be followed up in the following weeks. Shane also fielded some other enquiries that he will be following up.

This year’s show was the 80th and featured an entertainment lineup that included the Topp Twins and Wanaka-based celebrity cook Annabel Langbein.

More than $10.9 million is injected into the local community each year from the show. Trade exhibitor numbers were up this year, with 492 stalls compared to 472 last year.

There were twice the normal number of cattle entries this year, with 117 entered. Horse and sheep entries were strong, at 1965 and 194 respectively.

As normal at these sort of events, there was some good feedback on the company from past clients and the container always attracts very positive attention and comments, with some taking photos of it. 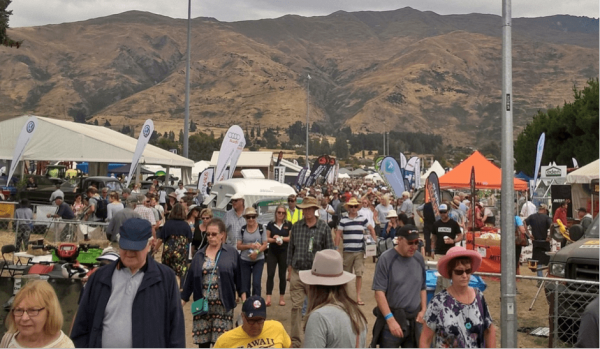 Part of the crowd at this year’s Wanaka show.