New Zealand is home to 4.86 million dairy cows spread over 11,748 dairy farms. Most people have an idea what a dairy cow is, and what they do, but far fewer know the characteristics that differentiate the various breeds from each other. Here’s a brief rundown on some of the breeds of cow you may see on farms around the country.

The first importation of 'Dutch-Friesian' cattle into New Zealand was made by Canterbury breeder Mr John CH Grigg in 1884. Four years later the breed was introduced into the North Island via a herd established in the Wairarapa. Further importations of 'Holstein-Friesian' cattle were made from America in 1902/03.

The black and white cow quickly gained popularity in the North Island, but it wasn't until 1910 that their breeding and importation was taken up seriously. Early endeavours by breeders to keep accurate pedigrees of these animals resulted in the New Zealand Holstein Friesian Association being established in 1910.

Holstein Friesian cows are farmed throughout New Zealand, in all areas, and under all types of dairy farming systems. They have proved themselves adaptable to a wide range of environmental conditions worldwide and this trait has created an export market for our New Zealand Holstein Friesian genetics, whether the Mycoplasma Bovis outbreak changes this remains to be seen.

Due to New Zealand’s temperate climate the average dairy cow in New Zealand is farmed outdoors, grazing on ryegrass-clover pasture throughout most of the year, with some feed supplementation, such as PKE, when necessary. It will commonly be wintered on forage crops such as kale, fodder beet or swedes plus hay and silage.

Those that are farmed on or in some form of the off paddock facility, like a dairy barn system, may have produced considerably more than the average.

Holstein Friesians (comprising a minimum 14/16 Holstein Friesian genetic makeup) according to the DairyNZ, produced on average 4,407 litres, containing a total of 360 kg of milk solids comprising 165kg (3.7%) protein and 195kg (4.4%) fat per cow over a 217-day herd test period.

The breed is also a major contributor to our red meat markets, both domestic and international, as a large number of surplus male offspring are farmed as Friesian bull beef.

The Friesian cow when crossed with a beef breed, Hereford for example, produce offspring that are highly sought after by calf rearers and fatteners for being fast growing and placid natured. 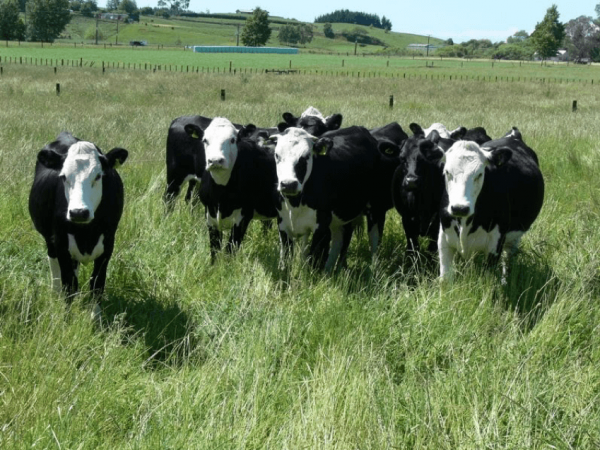