New Zealand’s first pedigree Jerseys were two cows and a bull brought to Whanganui by Thomas Syers in 1862. Smaller than Friesian-Holsteins, Jerseys soon became popular. Since 1886 to the present day, the purebred of the Jersey breed has been registered in a New Zealand Herd Book. Taranaki was the first Jersey province in the country, in the early 1900s, and today Jersey cows can be seen on farms the length and breadth of the country. They comprise approximately 10% of the national herd and are suitable for all types of dairy farms and systems being particularly suited to once a day milking.

Jersey cattle are typically light brown in colour although this can range from almost grey to black and they can also have white patches. A true Jersey will always sport hard black feet, making it less prone to lameness, and a black nose bordered by a white muzzle.

Jersey cattle can be found around the world and can adapt well to extremes in temperature from scorching heat to cold winters. They have very good health traits. Cases of mastitis and dystocia (difficult calving) are low. They are renowned for their longevity cutting down the need for herd replacements. Jersey cattle are numerically the second largest breed of dairy cattle in the world, behind Holstein Friesian and ahead of Brown Swiss. In New Zealand, they make up 9 % of the national herd. 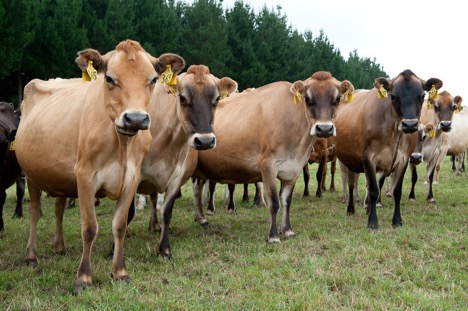 The milk produced by Jersey cows has the highest fat and protein content of all the dairy breeds and as recent studies shed a more favourable light on the health implications of dairy fat consumption, demand for, and interest in, Jersey cattle should remain positive.

Due to the centuries of breeding focusing on dairy attributes the Jersey breed are unlike Holstein Friesians and do not contribute in any great way to the red meat industry in New Zealand.

Jersey bulls are in demand as the bull of choice to mate with heifers, of all dairy breeds, as the produce a small calf that will be born easily and not put any strain on the heifer, who is calving for the first time.