Keith Woodford is an independent consultant who holds honorary positions as Professor of Agri-Food Systems at Lincoln University and Senior Research Fellow at the Contemporary China Research Centre at Victoria University. He recently travelled to Tillamook, Oregon with Calder Stewart representatives to see what can be learned from their dairy farming practices. This is part 1 of 3, which talks about why Tillamook is a great place to take reference from. 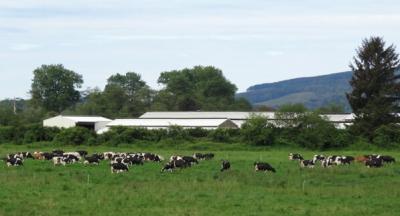 This last week I have been in Tillamook, in Western Oregon. Together with three colleagues from Calder Stewart, I have been exploring the dairy systems here, to see what learnings we can bring back to New Zealand.

We found was that there is considerable diversity of system. Most barns are free-stall, but some are compost systems – more on that later. Most farms still milk through herringbones and rotary sheds, but there are increasing numbers of robots, including on grazing farms.

In Tillamook, everyone sheds their cows in the winter from the cold and rain, and also to protect the pastures. Most farmers have their cows in barns all of the year. But our keen interest was to observe the hybrid systems, where cows graze outside from spring to autumn, but farmers still use the barns on an ‘as needs’ basis throughout the year.

Tillamook is a high rainfall zone on the Pacific Coast and has much of the same feel about it as the West Coast of New Zealand. It is one of the few places in the world where dairy cows can be grazed on perennial pastures, and using the same grass species as we use in New Zealand. The latitude is 45 degrees North, which is a latitudinal mirror image of Oamaru, Alexandra and South Westland. But climatically, it is Westland that is the best comparison.

Winters are always wet in Tillamook but the current season has been particularly wet and cold, with four metres of rain in seven months since October. A winter day is about 10 degrees and a summer day around 20 degrees. On that basis, we noted during our stay this week that summer has still to come!

All farmers supply the Tillamook Dairy Co-operative which is famous for its cheeses. Tillamook started branding their cheese way back in 1925, and their members now receive milk cheques about 35% higher than standard American commodity prices. In some ways, Tillamook is the Tatua of American dairy, but with more emphasis on consumer products and less on specialised ingredients than Tatua. They are a great example of how a co-operative can bring benefits to all its members.

DISCLAIMER: This is an extract from an article published on Interest.co.nz on May 22nd 2017. Some paragraphs have been omitted or repositioned. Read the full article here