Keith Woodford is an independent consultant who holds honorary positions as Professor of Agri-Food Systems at Lincoln University and Senior Research Fellow at the Contemporary China Research Centre at Victoria University. He recently travelled to Tillamook, Oregon with Calder Stewart representatives to see what can be learned from their dairy farming practices. This is part 2 of 3, which talks about compost barns and robot milking systems. 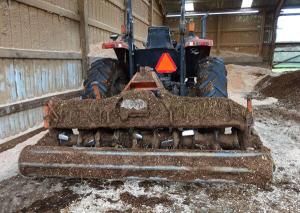 Our visit was organised by Troy Downing from the Oregon State University Extension System who is based in Tillamook. Troy has visited New Zealand and understands our systems. He is also a great fan for grazing systems and has no great love of barns. But the reality is that barns are essential in Tillamook for environmental and market-related reasons.

Troy asked us why we in New Zealand would want to use barns if we do not have to. My response was that we have environmental and market-related reasons, just as they do, that are forcing us to do a rethink of the way we will farm in the future. So, at the very least we need to fully understand the pros and cons of barns.

Troy told us that his own preference is for compost barns where the cows lie on the compost under a covered roof. In a well-managed compost barn, the manure generates considerable heat, which keep the cows warm and dry. There is no smell in a well-managed barn. It is only if non-aerobic bacteria are present that there is an unpleasant odour. The udders stay much cleaner than in a conventional free-stall barn. 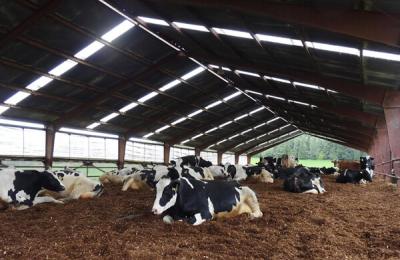 The compost beds are tilled twice daily for aeration – this is essential. Straw is added every three days and wood chips are added weekly. Once a year, the compost is taken out to the fields. The standard rule is that the large American cows require seven to nine square metres of compost bedding space.

Blaise told us they were very happy with their compost barn, which was much cheaper to build than a free-stall barn. Also, their cow replacement rate had declined considerably. The only disadvantage appeared to be the cost of the wood chips, and this is something we would need to look at closely under New Zealand conditions.

The Bennetts were also very pleased with their investment in robots. Milk production increased 10% to 2.65 kg of milksolids per day (all year average) with no appreciable increase in feed after they installed the robots. Their new system of robots plus compost were also giving very low somatic cell counts – much lower than average New Zealand numbers.

DISCLAIMER: This is an extract from an article published on Interest.co.nz on May 22nd 2017. Some paragraphs have been omitted or repositioned. Read the full article here.