Keith Woodford is an independent consultant who holds honorary positions as Professor of Agri-Food Systems at Lincoln University and Senior Research Fellow at the Contemporary China Research Centre at Victoria University. He recently travelled to Tillamook, Oregon with Calder Stewart representatives to see what can be learned from their dairy farming practices. This is part 3 of 3, which talks about grazing, feed mixes and genomics. 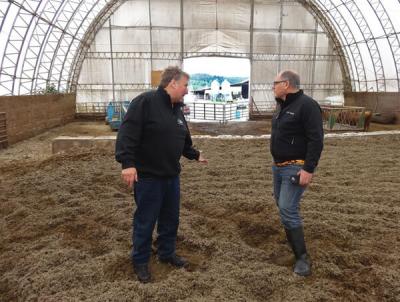 One of the grazing farms we visited was set up some thirty-five years ago by Kiwi Rob Seymour and his American wife, Amy. We were shown around by their son John who now manages the farm. Rob and Amy met when Amy came out to Lincoln University on an exchange from Oregon State Uni, and son John also spent a semester at Lincoln in 2010. So they, and also others such as Tillamook farmers Brad and Melody Cowan whom we visited, know and understand the New Zealand system very well.

In Oregon, the grazing system does have to be adapted to a hybrid. Troy has calculated that on the Seymour farm about 65% of the milk comes from grazed pasture, with the rest from barn-fed TMR (total mixed ration) feed. The Seymour cows are typical KiwiCross from LIC semen, and produce about 500 kg milk solids (peaking most years at about 2.4 kg per day). In Tillamook, the grain-fed component can come from the Mid-West, some 2000 km away, and the alfalfa hay typically comes from Idaho. Silages are grown locally.

When we were there, the rain had been coming down and so the Seymour cows were inside. The cows adjust without problem to the nutrition change, but they do like to get outside again when the sun shines.

We visited a fascinating grazing farm owned by Kurt Mizee who milks 175 high performance cows with three Lely robots. The cows have to walk up to 1.6km for grazing, but his system gives him about 2.8 daily milkings per cow. Kurt, who is also now the local Lely dealer, is currently designing a robot grazing system for a 1200 cow organic farmer.

A key characteristic of Kurt’s system is the mix of feeds. The cows need feed incentives to head out to fresh pasture, but a different feed incentive to come back to the barn. So, whereas the Seymour grazing system was all-pasture whenever the weather allowed, for Kurt’s system it was a mix of pasture and TMR even in summer.

A number of farmers we met are interested in cow genomics and they are using this to drive cow production. Kurt selects strongly for free-milking trait. This is because he needs the cows to get in and out of the robot quickly so another cow can get in. Sexed semen, and embryo transplants all play a part within his system.

For me, there have been lots of ‘take away’ messages from Tillamook, including some that were unexpected. I have decided I now need to learn more about compost barns. The role of genomics in selecting for specific traits is something else I need to do more thinking about. There is no doubt that Tillamook is doing extremely well from its value-add focus, but of course that has been a long journey. And they can only make it work with 12-month supply of milk.

DISCLAIMER: This is an extract from an article published on Interest.co.nz on May 22nd 2017. Some paragraphs have been omitted or repositioned. Read the full article here.